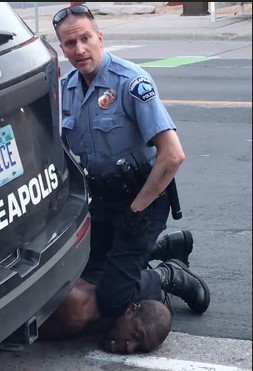 Derek Chauvin has been found guilty of the murder of George Floyd.

NewsOnline Nigeria reports that the jury reached a verdict on Tuesday in the high-profile trial of the white former police officer charged with murder and manslaughter for the death of African-American George Floyd.

Derek Chauvin, the former police officer seen on video pressing his knee to George Floyd’s neck for more than nine minutes, was found guilty of all counts he was charged with, including second-degree murder, on Tuesday.

Chauvin, who is white, was charged with second-degree and third-degree murder, as well as second-degree manslaughter in the death of George Floyd on May 25, 2020, while in police custody.

Cell phone video of the incident went viral and touched off months of protests in the U.S. and abroad condemning police brutality and calling for racial justice. The widely watched trial, which began in March with jury selection, was livestreamed —Minnesota’s first criminal case to be televised.

Here’s what to know about the charges:

Second-degree murder is causing the death of a human being, without intent to cause that death, while committing or attempting to commit another felony. In this case, the alleged felony was third-degree assault. Chauvin is charged with committing or intentionally aiding in the commission of this crime.

To convict Chauvin on this count, Judge Peter Cahill told jurors they must find that the former officer intended to commit an assault that could cause bodily harm or intentionally aided in committing such an assault.

“It is not necessary for the state to prove the defendant had an intent to kill Floyd. But it must prove that the defendant committed, or attempted to commit, the underlying felony,” the judge said.

Cahill added that the state must prove that the assault either inflicted bodily harm on Floyd or was intended to commit bodily harm. That essentially could include loss of consciousness, the judge said.

Get the Coronavirus Watch newsletter in your inbox.

Third-degree murder is unintentionally causing someone’s death by committing an act that is eminently dangerous to other persons while exhibiting a depraved mind, with reckless disregard for human life. Chauvin is accused of committing or intentionally aiding in the commission of this crime.

Cahill ruled last fall that this charge did not fit the Chauvin case because the statute required a showing of danger to other persons. However, a Minnesota appeals court in February upheld the third-degree murder conviction of former Minneapolis police officer Mohamed Noor, who fatally shot Justine Ruszczyk Damond in 2017. Noor’s actions were focused solely on Damond.

During jury selection in the Chauvin trial, the appeals court ruled that Cahill should not have dismissed this charge. He subsequently reinstated the allegation. The Minnesota Supreme Court is scheduled to hear an appeal of the Noor decision in June.

Second-degree manslaughter is culpable negligence where a person creates an unreasonable risk and consciously takes the chance of causing death or great bodily harm to someone else. Chauvin is charged with committing or intentionally aiding in the commission of this crime.

“Culpable negligence is intentional conduct that the defendant may not have intended to be harmful, but that an ordinary and reasonably prudent person would recognize as having a strong probability of causing injury to others,” Cahill told jurors.

In summing up his legal instructions on the charges, Cahill told the jury there is no crime if a line of duty police officer uses reasonable force to make a lawful arrest. He instructed the jurors to consider the “totality of the facts and circumstances” in deciding whether Chauvin’s actions had been reasonable.

If convicted, Chauvin likely could face 12 1/2 years in prison under the state’s sentencing guidelines for first-time offenders. However, he could receive a longer or lesser term.

Prosecutors have asked the court for a sentence higher than the state guidelines based on alleged aggravating factors. If the judge agrees, that likely means Chauvin would face no more than double the sentencing guidelines.

Jurors will not be released from service after they deliver their verdict. Instead, they will be instructed to decide on aggravating factors alleged by the prosecution.