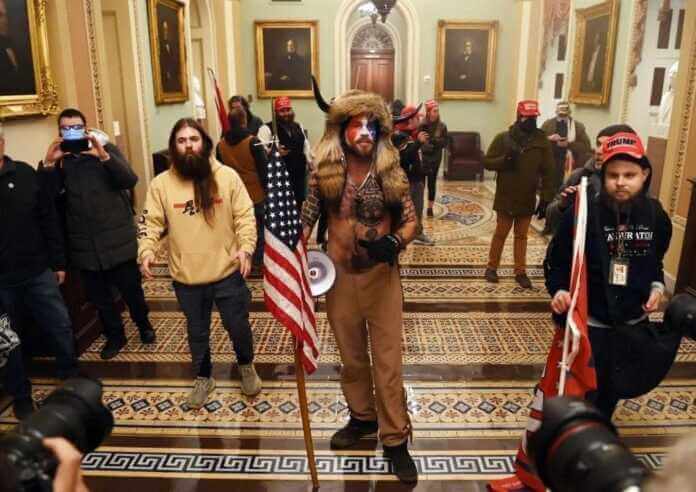 NewsOnline Nigeria gathered that Vice President Mike Pence was ushered quickly out of the Senate chamber as it recessed and the debate between senators had to stop mid-speech. The House also recessed.

Pro-Trump demonstrators breached the barricades and crowded on the Capitol steps, which is normally only accessible to lawmakers. People jumped the barricades surrounding the Capitol and police began running around the hallways and telling people to get away from the windows.

A police officer on the third floor began shouting that protesters had got inside the building and that people should take shelter.

Senators were locked inside their chamber on the second floor of the Capitol building and protesters wearing Trump “Make America Great Again” hats and carrying flags were seen gathering outside the chamber doors.

“Immediately seek shelter in the closest office,” an announcement over a loudspeaker said across the Capitol, which told people to lock doors as well. “Remain quiet and await further directions.”

More trump rioters bashing in the windows at the Capitol.

This ain't peaceful, folks.
Republicans OWN this #sedition. pic.twitter.com/FtYlzdSjvv

Earlier on Wednesday, President Trump told a rally of his supporters outside the White House that he would never concede that he lost the election, as Congress readied to certify Joe Biden’s victory.

“I will never give up. We will never concede,” Trump told the cheering crowd. “We will stop the steal.”