Home Headline Biafra: IPOB Reveals How They Get Arms To DSS 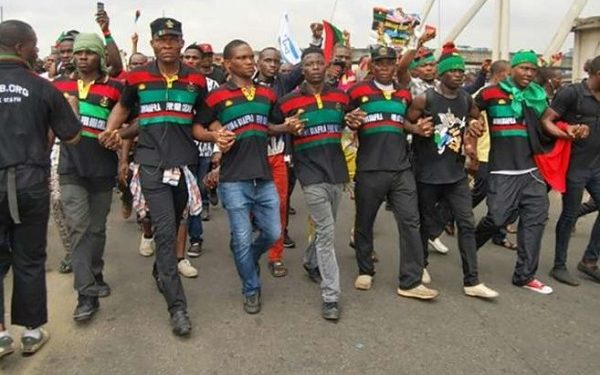 We don’t buy arms, we produce locally says IPOB in its latest revelation to DSS.

NewsOnline Nigeria understands that the Indigenous People of Biafra said it produces its arms locally.

This online news platform reports that the secessionist group stated this on Thursday while debunking allegation credited to the Department of State Services that IPOB was plotting to attack banks to get money to purchase arms.

The Media and Publicity Secretary of the group, Emma Powerful, described the allegation as a poor script.

He said, “We are not looking for money to buy arms because we produce our arms locally.

While assuring banks in the area of safety, the pro-Biafra publicist said IPOB members were freedom fighters and not criminals.

The group’s statement read in part, “The DSS is propelling this wicked propaganda to blackmail Eastern Security Network and IPOB, and dent our global reputation.

“IPOB and ESN are not criminals and we have no plans or agenda to touch any institution particularly banks.

“We are not looking for money to buy arms because we produce our arms locally and cannot attack or kidnap anybody for ransom. “We don’t inflict pains on the people we are fighting for their freedom. DSS must stop this rubbish and engage their time on something more meaningful. This poor script cannot fly… ESN has never left its mandate which is to defend Biafra land against Fulani terrorists and killer herdsmen.”

The statement added, “All banks in Biafraland must be wary of the DSS because it is possible they are planning to sponsor attacks on banks and turn around as usual to blame it on IPOB and ESN.”

The group added that any armed robbery gang that would in an attempt to tarnish the reputation of IPOB and ESN would regret their action.